Tim would hate it if he knew I was writing this, but I can’t possibly tell all our friends and family about the experience I shared with his family today. It all started this morning, November 9, 2007 at 9am.

I woke up early to prepare for Tim McGoverns funeral and the sun was shining bright through the windows. I stepped out the front door and felt the cool, crisp air take over my body and instantly had flashbacks of Tim and my early morning workouts at Purdue. A smile came to my face as I heard Tims voice in my mind bellowing cadences to get us through the last few miles.

As I approached the church I saw what looked to be around 30 motorcycle riders, in full gear, at the church entry way. They were the Patriot Guard Riders (Tims riders page). They attend funerals of fallen soldiers with two goals: to show their respect and to shield the family from unwanted interruptions. They stood in silence, lining the entry to the church and holding flags.

I entered the church and found many familiar faces and organ music playing. At 9:30am the organ stopped, the church went silent and a bell started to ring. Long, slow, a few dozen times. The only thing that broke the silence was the sound of an army officer giving orders and his soldiers marching in step, bringing Tims casket into the church. Tims dog tag was hanging from the end of the casket. The ceremony continued (in full Catholic style) and the priest delivered a very heart touching homily for Tim. If you know Tim, you know that he was a born leader. The homily communicated this with the priest talking about Tims leadership with his troops. “In the Army”, the priest started, “Tim would have been the one who had to tell the family that someone had died, but no one under Tims command ever died”. At the end of the ceremony, 6 soldiers covered his casket in an American flag and loaded it for transport. The next part of the story is the most amazing piece for me.

Tim was on his way to be buried back in the town he grew up in, Idaville, Indiana. It’s about 6 miles outside where the funeral was. From the second the precession started from the church it was an experience I will never forget. We were lead, and followed, by the Patriot Guard Riders. All vehicles not with us for the entire 6 miles were pulled over and many drivers were out standing next to they cars. They saluted or covered their hearts while we all drove by. For a majority of the trip, flags lined both sides of the streets… every 10 feet. People left their homes and business and were standing next to the road, showing their support. Representatives of every branch of the military as well as police and fire men lined the streets in packs.

As we approached the final stretch of road there are a few key elements that stick in my mind. The ladder trucks from the fire department had raised a giant 30 foot flag between them that we all drove under. What seemed like the entire Idaville community lined the streets holding flags and signs reading, “God Bless You Tim” and “Thank You”. And as we arrived the Patriot Guard Riders were there again, holding flags on either side of the entry way as we all passed by.

The final moments were some of the hardest for me. As we all stood around, the Army soldiers did their thing. The man in charge ordered a 3 volley salute and 3 shots fired off over the casket from the soldiers. I hadn’t noticed but off in the distance was a lone soldier who started to play taps on his trumpet. 6 soldiers then removed, folded, inspected and presented the American flag that covered Tims casket to Tims family.

I have the honor of having known Tim and having him be part of my life. A good friend of mine had the following to offer recently when we were talking about Tim, which I thought I would share — “You will remember him forever young and powerful (as you grow older and weaker). Keep smiling. He went doing what he loved. I wish on all of us to go that way”.

Thank you to the McGovern family for allowing me to share this experience with you. Tim was my brother, and will be missed.

Those who knew Tim will remember him for his loyalty, his devotion to his country and for his friendship. Our friend, Tim McGovern was killed while on duty, defending our country in Iraq on October 31, 2007. 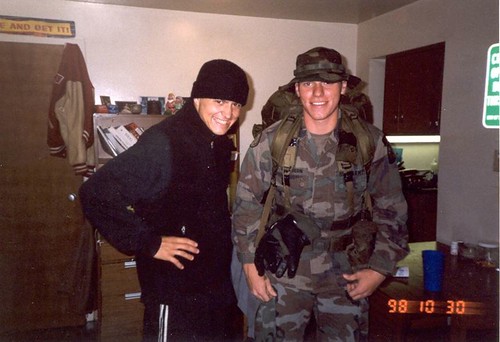 I grew up with Tim and roomed with him for 3 years in college. I wouldn’t change the time we spent together for anything. The memories I have from the years I spent at Purdue mostly contain the things he and I did together. Mountain climbing, early morning training, experiencing college life together and eventually, meeting my wife Amy. Our hearts are broken because of his passing. But we can continue to smile and be proud thinking back on all of the memories of the time we shared together and knowing he has made our country a better and more safe place. Tim “Fatness” McGovern will be in our hearts forever.

Arrangements are still being finalized. More information will be available on their website.